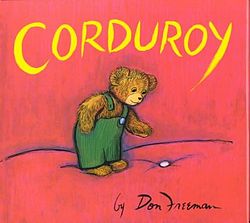 Summary: This story is a about a teddy bear named Corduroy, who lives in a department store.  One day, a little girl wants to buy Corduroy, but her mother says no because he is missing a button.  That night, he ventures off into the store in search of his button, but has no luck.  The next day, the girl comes back to the store and  buys him anyway.

About the Author: Don Freeman was born in San Diego, California on August 11, 1908.  After graduating from high school in Missouri, he went to New York City and studied etching.  He began working for the New York Times and the Herald Tribune, sketching impressions of Broadway shows.  Don was introduced to children's literature when he was asked to illustrate several books.  Soon after, he began writing and illustrating his own children's books until he passed away in 1978.  (http://www.sullivangoss.com/DonFreeman/)

Pre-Reading Activity: A friendly way to hop into this read aloud would be to create a discussion among the students who have a teddy bear, and describe them to their classmates.  Descriptions the teacher would ask for is the name, color, size, feel, overall appearance, and where the students got their teddy bear.

Post-Reading Activity: The teacher would bring to class a bag full of buttons and distribute them to several small groups.  Students would work together to derive a couple of characteristics from observing the buttons such as shape, size, color, and number of holes.  Once they have viewed all the buttons, students can begin classifying their buttons in two different groups.  The teacher would walk around the classroom observing the students' categorization and provide help if needed.  Through this activity, students will have fun gaining a better understanding of classification.

Reflection: Corduroy is one of my favorite stories from my childhood.  This teddy bear is a character the reader quickly becomes a fan of and hopes he finds a home.  A majority of childhood books published around 1968 do not include African-American characters, but I liked how the book Corduroy strayed away from the norm.  Rereading this classic, I discovered multiple themes making this book more memorable.

Buy this book now at Amazon.com
Posted by Unknown at 2:58 PM