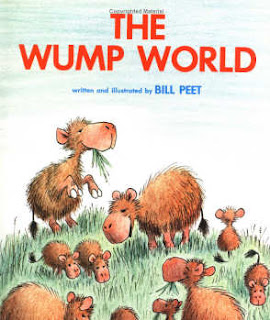 Summary: This story is about Wumps and their imaginary world filled with healthy plant life to eat and crystal clear lakes to drink from.  A group of aliens called Pollutians arrive to their small planet and begin destroying it by cutting down the forests, leveling the land to construct skyscrapers, and build roads.  The Wumps run in fear to underground tunnels, away from the noise and destruction.  Eventually, the Pollutians leave because the small world is so badly polluted and move to another planet to colonize.  The Wumps come out from the tunnels and are shocked at what they see.  A small patch of grass gives them hope that they can revive the land, and over time, they do.

About the Author: Bill Peet was the author of thirty-four children's books for the publishing company Houghton Mifflin.  Bill was also an illustrator, working for Walt Disney for twenty-seven years, working on films such as Fantasia, Peter Pan, Pinocchio, Sleeping Beauty, Cinderella, Song of the South, Dumbo, Snow White and the Seven Dwarfs, Alice in Wonderland, 101 Dalmatians, and The Jungle Book.  After leaving Disney, he became a full-time children's author producing mainly picture books.  His first book Hubert's Hair-Raising Adventure was published in 1959 and he would continue to write great stories and memorable characters.  In 2002, Pete passed away, but his art still lives on.  (http://disney.go.com/disneyinsider/history/legends/bill-peet)

Pre-Reading Activity: I would begin by activating prior knowledge by asking the question, "What is found in nature?" and recording the students' responses on chart paper.

Post-Reading Activity: I would give students the option to do one of three activities.  The first activity would be writing an alternative ending, such as the Pollutians changing their mind about polluting the planet and would they decide to stay or go.  Another alternative ending could be what the Wumps do to prevent their planet from being polluted and how they would protect their planet from being attacked in the future.  The second activity would be a story board, where one student does the illustrations, while the other student writes a sentence. They would have to do six pages, which would have to follow the correct sequence of events from the book, and include how the Wump World looked in the beginning, how the Pollutians invaded, the change in land, water, and air, and how Wumps felt about the changes.  For the third activity, I would bring to class National Geographic magazines for students to read and cut-out pictures to compare to our story The Wump World.  Students would look for parts of the world that have been polluted, and investigate how they became polluted.  Volunteers would have the opportunity to share their assignment with the class, but all of the students' work would be collected and looked over.

Reflection: Teaching children the importance of not polluting and giving supporting reasons can often be complicated and difficult to comprehend.  The Wump World does a great job of getting this message across.  Bill Peet is among the elite as an illustrator, as the pictures help elaborate children's minds of the world and characters he has created.  Any time a book incorporates its literature with a subject area, it makes lessons for efficient to teach.  This book brought a lot of ideas to mind, and trying to pick one or two activities was very hard.  With this book, I would setup four groups, each with a different activity, and give students the opportunity to choose which one they would like to do.

Buy this book now at Amazon.com
Posted by Unknown at 1:54 PM