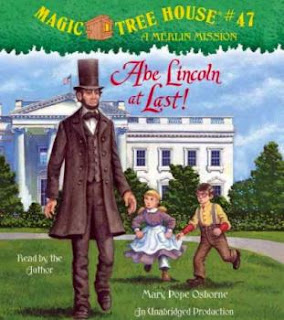 Summary: Jack and Annie travel back in time to reverse the cast spell placed on Merlin.  They need to collect four items, two of which have been collected prior to the story beginning   Jack and Annie are in the year 1861 on the front lawn of the White House and meet Tad and Willie, the President's sons.  After making a wish to meet the President, they transport further back in time and meet a boy named Sam.  Soon after Sam gives them a feather pen he made, they are pulled back to the White House lawn.  Jack and Annie find the President walking around outside, and he tells them a story about when he was younger, how he met the two and played a trick on them by having them think his name was Sam.  They reassure to Lincoln the Civil War will end and freedom will come; he gives them the final item.  Jack and Annie have collected all four items and go back to the Magic Tree House, returning to the present, and then head off to school.

About the Author: Mary Pope Osborne was brought up by a father who was in the military.  At a young age, Mary traveled the world with her father, and after graduating from the University of North Carolina at Chapel Hill,  she continued her love of traveling.  As an author of children's literature, she turns her day dreams into stories for children to enjoy.  Mary was an established author for over ten years before she began the Magic Tree House series with her husband and one of her best friends.  (http://www.scholastic.com/teachers/contributor/mary-pope-osborne-0)

Pre-Reading Activity: Using construction paper, scissors, glue, and markers, students would construct a timeline highlighting the key moments in Abraham Lincoln's life.  The class would be instructed to find the year he was born, elected as president, signed the Emancipation Proclamation, assassinated, and other events the student found interesting.  I would check their timelines before they could begin gluing the events.

Post-Reading Activity: I would connect the book to this year's presidential election and introduce students to vocabulary such as conservative, liberal, republican, democrat, and the meaning of democracy.  Students would receive a map of the United States and color each state either red or blue depending on which candidate won the particular state.  I would begin a class discussion about the electoral college and that a candidate may not win even if they received the popular vote.  I would get my hands on a ballot and give students the opportunity to see what one looks like, but also contribute to a mock vote to see who would become President if it were up to our class. 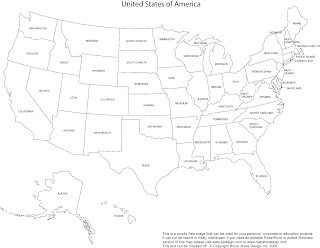 Reflection: Our book club chose Abe Lincoln at Last! because it tells an adventurous story while at the same time, providing the reader with insights of Abraham Lincoln and the year 1861.  The back of the book includes factual information about important events that took place and why Abraham Lincoln was considered one of the best presidents of all time.  The Magic Tree House series is a great set of books to have in any classroom, and with the common core standards, these books are helpful to incorporate reading and writing with other subjects.  With each Magic Tree House book, there is a Fact Tracker book that goes along with the story book, supplying students with more educational information on the particular topic.

Buy this book now at Amazon.com
Posted by Unknown at 7:13 PM