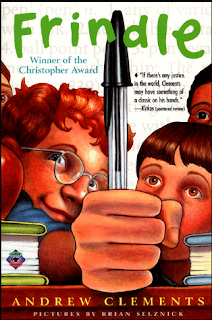 Summary: A boy named Nick in Mrs. Granger's fifth grade English class makes up a word for a research paper about the history of the dictionary.  He creates the word "frindle," another name for a pen.  The word begins being used by the fifth grade and eventually becomes popular across the country.  The story ends as Nick is a rich college student from marketing the word "frindle." He receives a package from Mrs. Granger of a dictionary with the word frindle in it, along with a letter stating how proud she is of his accomplishment.

About the Author: Andrew Clements was born in Camden, New Jersey in 1949 with a family who loved to read.  After one of his tough high school teachers suggested that one of his poems should be published, the thought crossed his mind that he might want to be a writer.  While at Northwestern University, a professor of a nearby college noticed his work and asked if he would like to teach a creative workshop.  He went on to teach in a couple of public schools within Chicago for seven years.  When enrollment went down, Clement lost his job and moved to New York City to become a songwriter, but it didn't work out.  A college friend of his gave him a call asking for help with a new company that wrote children's picture books.  It was then, when Clements began stirring up thoughts for his first novel Frindle, which took about six years from thoughts to a published copy.  (http://www.andrewclements.com/bio.html)

Pre-Reading Activity: As a class, we would look for the definition of "frindle" in the dictionary, but will not find he word.  We will look at how the dictionary is structured as it provides a definition, the pronunciation, and part of speech.

Post-Reading Activity: Students would create their own word, providing its definition, pronunciation, part of speech, synonyms, and antonyms.  After students have created their word, they will then write a short story or poem about the word, and have the opportunity to share with the class if they would like.  I would walk around the classroom checking students work and attending to their needs and questions.

Reflection: Frindle is one of my favorite books and made me realize how much fun reading can be.  When I was a child, reading didn't interest me as much as it did compared to my classmates.  In fifth grade, my teacher read this book to our class and I was so engaged in the story that I've read it several times since.  Andrew Clements has a series of these types of books about students and school related issues.  Similar to Frindle, I have read them all multiple times.  It sounds funny to say this book has changed my life, but it has.  I only wish I had been introduced to this book earlier in my life.

Buy this book now at Amazon.com
Posted by Unknown at 12:01 PM